The last thing the world needs now is another chorizo recipe. Chorizo is a cliché. Pick up any newspaper or magazine and there’s a recipe for chorizo. But there’s a reason. It’s good; the dried Spanish-style sausage is packed with chilli and garlic. It pairs well with pasta as long as all the ingredients are robust. I use rigatoni instead of the usual clichéd penne.

Cook 250g rigatoni. Halfway through, place one or two chorizo sausages in the cooking water. Cook five minutes more. Drain. Combine pasta in a pot with a tablespoon of good olive oil, a drained tin of borlotti beans and half a tin of diced tomatoes. Slice chorizo, fold through pasta, place in serving bowels, add halved cherry tomatoes and a little crumbled feta. That covers most of Europe.
Posted by kitchen hand at 1:14 PM 0 comments 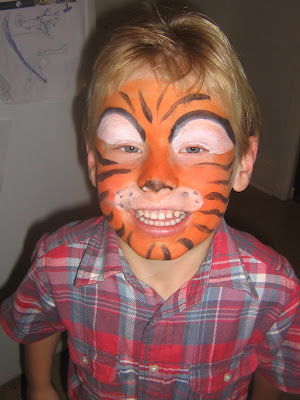 Wouldn't normally post a picture of a face-painted child but the quality of the artwork was outstanding in this case. He'd been to a party.

Thomas turns six tomorrow. Here he is at a few days old in 2006. I can see a bit of tiger about him now, come to think of it.

A bend in the river.

Late in the afternoon, we were on a beach on the southern side of the Murray River. The sky was that shocking blue you get in the inland and the day was still hot. The river was flowing north-east, which means the beach was on one of those bends that doubles back on itself, a billion-year-old fluke of nature.

The water was silent and deadly. You could see the current out towards the middle; fast busy wrinkles that would have you downstream in a flash. The boys waded to a small island near the shore that was just mud with an ancient gum tree growing in it. The gum was bent and its lower limbs dragged in the flowing water and it looked like an old fisherman trying to hold a net. No wonder the aborigines saw spirits in everything; the quality of light and the depth of the shadows out here makes figures of everything.

They practised going along in the softer current close to shore. I stood downstream a little and showed them how to swim towards the bank with the flow, and not against it. The current turbo-charged their strokes and they came out of the water at the top of the bend laughing for the joy of speed. On the bank Alexandra was sitting on the bank by her mother, scratching the sand as if looking for something.

Then the noise started. Shreds of white, like torn paper, started appearing on the trees lining the bank downstream. Thousands of them. They were straggles of white cockatoos lighting for the night in the arms of the gums. The screech was deafening.

Thomas saw it first. Seven am on a spring morning.
Posted by kitchen hand at 11:16 PM 0 comments

It was one of those cold nights that creep up on you in early spring. I was on the train. Every passenger was wired, but they call them customers these days. "Attention all customers: the 7.40 from Frankston has been cancelled due to overhead works. Fingers tapping and flicking. Necks craned down. Eyes fixed on screens. Automatons.

The page's message board or wall or whatever the thing is called had been beset with negative comments about one of its products. Many were factually incorrect, some were abusive, and some were unpublishable in mainstream media. He wanted to design a kind of pseudo app within the page that would get complaints off the wall and into a forum so that the comments could be sorted and the genuine ones dealt with individually.

"It’s your own fault," I had told him."I told you not to go near Facebook. Now you’re on Twitter as well. Ridiculous."

He winced. "But we have to be there. Social media is the new customer relationship management medium. It’s where everyone is these days."

"Nonsense," I replied. "You’re all the same; you follow the crowd like sheep. Twitter and Facebook are not 'social media' – whatever that means – they are monsters. Newspaper reporters don't interview any more; they reprint people’s inane tweets. It’s only a matter of time until people's last tweets are engraved on their gravestones. Here lies Joe Bloggs. The nerves in his fingers were still twitching when they found his body. The device in his hand was still warm. The incomplete message on it read: if I had my life over again, I wouldn’t retweet anyone’s stupid observa ...".

"This is what you have to understand," I went on. "Right now, social media is at the height of its j-curve or whatever the statisticians call it. People are even setting up pages damning individuals. Welcome to the 21st century lynch mob - where everyone has a rope and no-one has to show their face. But that's now. This is going to get very stale very quickly. Everyone is going to wake up tomorrow or the next day or maybe sometime in 2015 and wonder what the hell they were doing spending their lives tapping 140 rash characters into the atmosphere every ten minutes, or ticking a bunch of stupid 'like' buttons; and they’ll throw their device in the trash and gaze at their children in sudden stupefaction as if awaking from a trance, and they’ll ask them what their names are. And the children will reply in wonderment, like the surreal characters in a John Wyndham science fiction novel." I paused.

"Twitter and Facebook are the greatest waste of human intelligence outside an advertising agency, and don’t quote me on that because it’s not original."

He just stared. But he still wanted me to fix his Facebook problem. They never learn.

The next day I drove out of town in search of the sun and left it all behind.