Beer (Part One): #2 in a series of scenes from the advertising industry.

THE CREATIVE PRESENTATION FOR A NEW BRAND OF BEER IS TAKING PLACE IN THE BOARDROOM. THE CREATIVE DIRECTOR, JUSTIN, IS AT ONE END OF A TABLE AND THE CLIENT, MR EUGENE IONESCO (YES: HIS NAME REALLY WAS EUGENE IONESCO), IS AT THE OTHER END OF THE TABLE WHICH IS ABOUT A MILE LONG. WHAT IS IT ABOUT LARGE BOARDROOM TABLES? SOME KIND OF STUPID CORPORATE POWER GAME?

JUSTIN IS NERVOUS. FIRSTLY, HE HAS TO SHOUT BECAUSE THE CLIENT IS SO FAR AWAY. SECONDLY, THE POWERPOINT PRESENTATION IS ONE FRAME OUT, MEANING THERE'S AN EXTRA PAGE IN THE PRINT DOCUMENT BUT DELETED FROM THE COMPUTER. THIRDLY, THE CONCEPTS ARE NOT MAKING HIM JUMP THROUGH HOOPS TODAY.

JUSTIN IS WEARING A CHAMBRAY SHIRT OVER FADED JEANS. HE THINKS HE IS BEING IRONIC ABOUT THE EIGHTIES, BUT HE JUST LOOKS LIKE ROD STEWART. EUGENE IS WEARING A WHITE SHIRT OF FINEST COTTON OVER BLACK DESIGNER PANTS AND SOFT BLACK SUEDE SHOES. A SLINKY ORANGE SCARF IS TOSSED CARELESSLY AROUND HIS NECK AND DRIFTS WITH HIS MOVEMENTS LIKE GOSSAMER. HE LOOKS LIKE A YOUNG FRANK THRING PLAYING A MATADOR.

EUGENE IS ALREADY SEATED. HE SAYS WITH A PAINED LOOK: Christ. The traffic. Does everyone driving a BMW have to be so horrible to other drivers?

JUSTIN: But you drive a Mercedes, Eugene. You're superior. You don't have to worry about BMW drivers.

EUGENE: But Justin, BMW drivers are perfectly horrible to Mercedes drivers! They must think we're all gangsters and we're not. Only people who drive black Mercedes are gangsters.

JUSTIN: How do you figure that, Eugene?

EUGENE: Heavens, Justin. Have you driven down Chapel Street lately? Or through Moonee Ponds?

JUSTIN: No, Eugene, I live in Templestowe.

EUGENE: How frightful! Why do you live there? I thought it was compulsory for creative directors to never live in places like Templestowe. I mean, where do you have breakfast at weekends? The food court at Doncaster Shoppingtown?

JUSTIN: No, I drive to Burke Road, actually, and have eggs benedict at George's. But after we finish trading insults, do you think we could get down to showing you the work?

EUGENE: You can't beat a good insult to get on better terms with the agency, Justin. I'm sure you believe exactly the same about clients. We don't really dislike the agency, we just want to make life as hard as possible for it. After all, you are taking our money - earned perfectly legitimately by selling consumer goods on the open competitive market - and squandering it on dreadful advertising ideas devised by shady ill-educated illiterate oafs who think they are all Andy Warhols and Damien Hirsts and Ernest fucking Hemingways.

JUSTIN SAYS NOTHING, BUT STARES OPEN-MOUTHED.

EUGENE (SMILING): Present company excepted, of course, Justin. You wouldn't be so presumptive as to put yourself in that league, would you?

SLIGHT PAUSE AS JUSTIN WONDERS WHETHER IT'S AN INSULT OR A COMPLIMENT THEN REALISES IT'S BOTH.

JUSTIN: Let's get on with the work, Eugene.

EUGENE: Can I have another coffee?

TO BE CONTINUED.
Posted by kitchen hand at 10:48 AM 1 comments

Spaghetti recipe ahead of its time.

According to popular opinion, 1950s Australia was a cultural, culinary and social wasteland. One of the sub-texts of this misguided belief is that 'multi-cultural' food arrived only during that decade's post-war European migration into Australia. Presumably pasta, garlic, canned tomatoes and other exotic ingredients disembarked alongside the immigrants - or in their suitcases - off the same 1950s boats at Station Pier, to widespread nose-crinkling of the natives.

Chop up fowl in small pieces, add two tablespoons of lard, braise well, then add four cloves garlic (or onion), 2 lb of tomatoes, small cup of water, salt and pepper to taste. Simmer until fowl is tender, pour over spaghetti, add grated cheese and serve. Ordinary cheap cuts of meat can be used instead of fowl. This recipe uses 1lb of spaghetti and makes sufficient for 6 people. Small tin of canned tomatoes may be used.

Somewhat ironically, this recipe is in some ways – lardellare (to braise lean or cheaper cuts of meat with lard in order to prevent them drying out) – closer to the original peasant-style dish than its modern studiously-Italian version.

From the same publication: 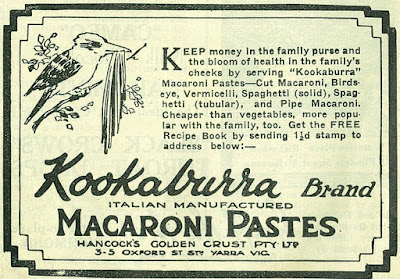 Hancock was the importer, hence the recipe name.

Roast potatoes are one of life's greatest benefits, especially when eaten hot straight from the oven having been baked with garlic and rosemary.

Unfortunately, I sometimes bake too many and despite our best efforts, some remain uneaten. There are many ways to use them up. Pizza restaurants slice them onto pizzas and call them 'gourmet'. I call them leftovers.

Beat half a dozen eggs and pour them into a non-stick pan over a low heat.

Place lid over the pan if it has one, turn heat to lowest and let it cook through gently. If brave, make an attempt to fold this monster omelette, otherwise leave it as it is and call it a frittata.

Slice into wedges and serve.
Posted by kitchen hand at 3:21 PM 0 comments

Nothing beats putting 'eco-' in front of your product name to generate utterly cynical marketing credibility. The average consumer is presumed to believe that the manufacture and distribution of a product without the eco- prefix has left a trail of environmental disaster in its wake.

But add those three magic letters and the marketer conjures a kind of damage reversal; and an enviro-pixie waves a wand of green fairy dust every time you buy it. Eco batteries. Eco downlights. Eco bananas, with machine-dipped red wax tips. Yesterday I saw a product in the bathroom department called Eco-Ply. Enough said. Every time you flush, a forest grows somewhere.

But eco- is not new. It pre-existed the green religion. I came across it in an old cookbook.

From The Leader Spare Corner Book, Leader Publishing, Melbourne, 1930. ('Spare Corner' was a weekly column in The Leader newspaper and the book was an annual collection of recipes published in book form. The year of publication suggests the eco prefix stood for economy.)
Posted by kitchen hand at 2:34 PM 2 comments

Getting to the moon in six easy steps.

PowerPoint: a series of slides full of 'faulty logic'.

At last. Someone has verbally, if not literally, destroyed PowerPoint.

I've been railing against PowerPoint for years. Some of my choicer PowerPoint quotes:

I was at my second office reading a forty page powerpoint printout about some marketing genius's idea of what 'sets a company apart'. It was full of words like 'innovate' and 'respond' and 'focus on the customer' but it was devoid of any common sense at all.

Yes, it's Bulwer-Lytton time again; the competition that asks you to write the opening sentence of the worst-ever novel. Shouldn't be hard: just read the average corporate mission statement or the introduction to a bureaucrat's PowerPoint presentation.

Send me a million and I'll throw in a powerpoint presentation complete with pictures of ripe fruit and people scratching their heads in supermarkets and pointing at apples and lots of text and big figures all in different font types and sizes, just like your bureaucrats would do.

It was quieter than usual for a Monday morning. No-one was going to break into a spontaneous powerpoint presentation.

At any other time and in any other place that would mean armed protection. But not on Planet WorkSafe, where everything is solved by regulations in triplicate and endless PowerPoint presentations.

... nothing of any value ever happens in meetings except sandwiches, usually the chicken and avocado or turkey and cranberry variety. They help you try to forget the powerpoint presentation but somehow you never can. You follow each and every word painstakingly, like watching grass grow. And you listen to the presenter reading each and every word that you can see perfectly well right up there on the screen.

I drove to the supermarket at half past six. It was dark and raining and the carpark was full of puddles reflecting neon lights. The supermarket was packed with jaded city workers hunting for their dinner after a day of exhausting powerpoint presentations.

Final word to The Guardian's Andrew Smith, from the article at top:

Perhaps even worse, in the context of the 21st century, is a charge levelled by the French writer Franck Frommer in his book How PowerPoint Makes You Stupid. Because PP can only present propositions and arguments as equations, he says, they appear to have no owner; no one need feel responsible for them. In the post-banking-crisis world, we know both how seductive this is – and how dangerous.