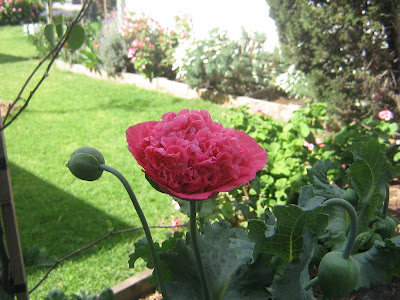 The travelling poppies have put in their annual appearance, this year a week or two early; deciding to position themselves in the very hot north-facing bed that catches the mid-morning sun, and which last summer saw the demise of the hedge of Pale Lilac Perennial Balsam, Impatiens Oliveri. 2008 poppy here (scroll down to November) and 2007 version here. Seems they're travelling north year by year.

Further garden clippings: this morning, I put in Tigeress and Amish Oxblood, which sound like horses from yesterday’s Caulfield Guineas but are in fact two heirloom tomatoes (Tigerella is a different, hybrid version in some countries). They went into the front vegetable strip which is currently sprouting broadbeans in all directions.

Digressing wildly, and speaking of yesterday’s races, the final seconds of the Toorak Handicap were a dramatic triumph, the kind of finish that has the caller struggling to reveal the outcome with several horses hitting the line as one, and the actual winner’s name only mentioned for the first time milliseconds after the finish, having come so dramatically from behind. Yesterday, Bart Cummings-trained Allez Kingdom, carrying the lightest weight, grabbed the prize. (Leading up to the spring racing carnival and the Melbourne Cup, it is worth noting that Cummings’ first involvement in a Cup was in 1950 when he strapped for his father who trained Comic Court to victory.
Posted by kitchen hand at 4:16 PM