Literally. I'm painting the house. Most of the weatherboards are in good condition but some of the old paint is cracked and dry - to quote Tom Jones - particularly the east-facing side, which is subject to fierce morning summer sun; while the west is shaded by the building next door and the north unaffected, shaded by the eave during the height of summer.

The good news is you don't have to go to Bunnings. One of Australia's last remaining independent paint manufacturers, Viponds, produces a top-quality product for less than the Bunnings price on other brands. Viponds is in Norris Street, North Coburg and the customer carpark is ten steps from the door and you can look at the vintage paint cans in the display cabinet while you wait for your paint to be mixed.
Posted by kitchen hand at 4:53 PM 0 comments

Smoke on the water.

Foghorns could be heard from the bay most of last Sunday, a mournful sound that bounced off the dead flat sea and echoed up the hill. The Port of Melbourne must be a busy place. Everything we buy comes from China and it comes by ship and they don't stop on Sundays.

Despite the haze, there was a warmth in the air. In the early afternoon, we went down the hill to the beach. You couldn’t see twenty yards out to sea or up or down the beach. A thick, swirling pale yellow mist was rolling off the water and breaking up through the ti-tree like dry-ice smoke in an amateur stage production of Long Day’s Journey Into Night, assisted in this imagery by continued foghorns.

Then the fog was gone, exiting stage south, and the sun came out of the yellow, and the stage was restored to its proper size. Two ships were passing each other on the horizon.

The boys were in the water now. Baby Alexandra crept through the sand and down to the water's edge and then straight in, just like her brothers had done. She turned one a fortnight ago. 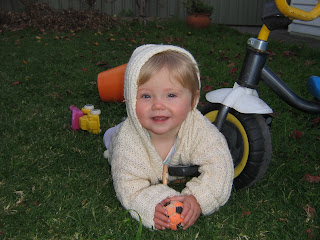 Coriander in the garden has shot to three feet. Quick! Pick it! What can you do with so much coriander? Turn it into a paste, like pesto. A bunch of the stuff blitzed with three large cloves of garlic, half a cup of pine nuts, olive oil, hard cheese, salt and pepper made a fragrant and delicious paste that can be dipped with hot roti, stuffed into chicken breast fired in ghee or stirred through basmati rice and served as a side with an inexpensive beef vindaloo made from that most underrated cut, chuck steak*.

For dinner I placed a generous amount of coriander paste into several upturned large 'plate'(portobello) mushrooms and dotted them with crumbled paneer and served these with the beef curry below and rice.

*Brown chuck steak in ghee and seasoning, then bake slowly – very slowly, up to eight hours – in a casserole with quartered potatoes and a paste of spices that you have toasted for thirty seconds in a pan (half teaspoon each black seeds, chilli powder, two teaspoons ground coriander, couple of pods of cardomom, an inch of ginger (grated), two large garlic cloves, a pinch of asafoetida). Top up with water and adjust throughout.

And, and here's one I took the other week of the boys hamming it up. 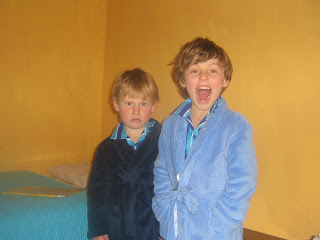 The lettuce in several varieties are trying hard but succumbing to bugs. But the mustard greens are holding their heads high. Even the snails and grubs won't touch them, thanks to their strong flavour, I suppose (I'm not sure how you get to prove that).

Got mustard greens in plenty? Try:
- Using them in place of spinach in filo pastries with fetta
- Boiling them with fenugreek (fresh or toasted seeds) and mixing with yogurt and a good dash of salt for a delicious Indian-inspired recipe. Good with vindaloo as a cooling side dish.

One entire viburnum tinus hedge in the back garden: gone. I planted it in 2005 when we moved here. It got to seven feet tall within five years, a magnificent hedge with small white flowers that attract bees. One of those thousands of species of bugs that followed the breaking of the drought last year got it. Apparently viburnum is prone to the problem. Spraying would kill the bees, defeating the point of growing a flowering hedge. I tried predator bugs (available on special order from Bunnings) - a good solution in which they post you out a plastic bucket full of predators that eat only the pest, solving the problem with no ill consequences for friendly bugs or bees. You spread the bugs among the foliage and they go to work and eat all the pests.

However, I had misdiagnosed the pest (it turned out to be lacebug, not red spider mite) so the problem remained unsolved. Air movement apparently assists eradication of the bugs and this hedge was against a solid fence. So out it came. I have planted a hedging conifer.

I can't even walk on the lawn right now. For the first time in years, the ground is completely sodden. It must have been like this years ago. We are on the banks of an ancient creek (a tributary to the Merri Creek) that now runs underground.

If you step onto the lawn, you sink into it, leaving foot indentations. I'll have to wait until it dries out - or at least becomes less sodden - before mowing. The accursed October winds will no doubt do the trick.
Posted by kitchen hand at 12:11 PM 0 comments

Saturday morning. I switched on the radio. You know the program. I mention it often enough. The voice was familiar. It was Ross Wilson. The song was At The Rock House. That finished and another Daddy Cool song came on. On 3RRR? Why not, of course. But there had to be a reason. It’s 2011. Surely not forty years since Eagle Rock? Surely yes.

Daddy Cool was always part parody. You could tell by the name. No serious rock band would choose it. In an interview (no link available) Ross Wilson says "we were loving the forms but taking the p--- (sic: they print far more objectionable words in the papers, why not this?) at the same time".


Wilson was especially keen to excavate the piano-based boogie-woogie sound he first discovered in his Dad’s jazz record collection. ... But in crafting a distinctive Daddy Cool sound, which suggested what he called "a past you never had", Wilson also plundered R&B and jukebox pop as well.


Wilson says everyone remembers when they first heard Eagle Rock. Immodest? Perhaps. But true. If you’re of a certain age, of course, otherwise go ask your father. For me, it was the May school holidays – 1971 - and the song burst out of the radio like Richmond’s Billy Barrott out of an MCG pack (ask him again). "Now listen ...!" The guitar break was a chainsaw massacre with chord changes. The song was an anthem like Advance Australia Fair isn’t. That’s a dirge.

Daddy Who? Has been remastered and reissued. Sounded good on Off the Record. Maybe it was just the memory.

In other radio news, the owner of Melbourne’s coolest (in the older sense, meaning calm, pleasant, clipped, well-spoken, enjoyable to listen to) radio voice - Ward Everaardt - retired last week. If you see a man riding by on a Harley Davidson, that will be him. Wave.