A Passage to India

And here's the one that was too big to carry around town last week.

I can't see a book of this scale (hardback, 480 pages) making much margin even at the price. They sell glossy magazines a tenth of the weight at a quarter the price and full of nothing. Nor are books subsidised by ads for watches and Burberry and single barrel Scotch.

This is not a cook book. They just sell it out of that section because there are recipes in it. It's a two-kilogram rebuke to purists who insist that only those who hail from such parts may write about them. Christine Manfield an expert on India? She is now.

Buy it for the photography. Not of food; though that is there. The teeming cities; the mysterious waterways in which fully clothed people bathe; the vast open laundries where hang a million coloured cloth squares; the markets, the faded shops, the peeling paint, the crumbling buildings, the remains of the Raj, the serpentine railways, the wicker houseboats, the temples, the children in rags, the street stallholders, the forests, the jungles, the mountains, the animals, the motorcycles, the Ambassadors (the automotive ones), the heat, the dust, the painted faces, and the whites of a small child's eyes.

After all this, the food is an afterthought. But what an afterthought. Indian food is the most photogenic cuisine in the world. The colours and textures are a stylist's dream. The most appetising food photograph in the book will present some (but not me; I'll eat anything) with a paradox: how can deep-fried fish heads look so delicious?


This corridor in the palace at Mau opened through other corridors into a courtyard. It was of beautiful hard white stucco, but its pillars and vaulting could scarcely be seen behind coloured rags, iridescent balls, chandeliers of opaque pink glass, and murky photographs framed crookedly. At the end was the small but famous shrine of the dynastic cult, and the God to be born was largely a silver image the size of a teaspoon.

Here's William at the same age of fifteen months. Hose off the dirt and you'd mistake one for the other. The hair is identical; Tom's was always straight.
Posted by kitchen hand at 12:30 PM 2 comments 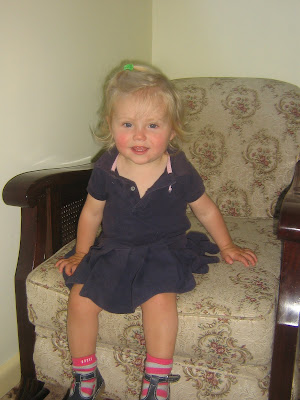 That was yesterday. She sat in my chair and smiled.

Today she wore yellow, and there was a trip to town; two bookshops, one retail store (other) and the State Library. But before all that, coffee.

Brunetti is 75 metres - to the inch - from Flinders Street station if you don't count the platform, escalators and steps. I had coffee (Vienna); Tracy cappucino. The children (Thomas and Alexandra) ate a coarse-sugar dusted doughnut, Italian-style. It was fat and doughy and fresh, and then it was just some grains of sugar on a plate and more grains on their faces.

Dymock's is downstairs off Collins. Dymock's recently announced expansion plans. You can see why. Their staff are knowledgeable and the book selection is as good as it gets in a chain bookstore. Dymock's is also soaking up the foot traffic from the defunct Angus & Robertson and Borders, the latter of whose staff were in turn snooty, unobtainable, uninterested or even disinterested. By contrast, Dymock's people spout opinions about their favourite books to anyone who will listen. This creates a good atmosphere; makes the bookshop interesting. There's a cafe.

I didn't buy a book. The one I wanted would have been too heavy to carry around town, so another day.

Then the Foreign Language Bookshop, also downstairs off Collins, but the other side. Tintin, Herge et Les Autos is unobtainable in English so the French edition had to suffice. I can read about 75% of it, but the book is about his illustrations, chiefly cars. Herge was an illustrator for Ford in the 1930s. This book is a must-have for Tintin fans. It is a beautiful design, with a clean cover featuring a full-bleed illustration detail showing a frowning Captain Haddock driving an open-topped single seater coupe in the rain, with a smiling Tintin and a puzzled Snowy beside him. The title in block letters is the only encroachment on the illustration. The rain is not illustrated, but is overprinted via a special process in a high-gloss plastic over the matte illustration, so it shimmers and flashes as you move the book in your hand. The publisher's mark is an unobtrusive moulinsart script running vertically near the spine. The spine is the distinctive Tintin red with black title.

Lunch: Dondon. I've written about Dondon before and you cannot write anything new about Dondon. One point off for playing Wham instead of Tom Jones; we sat outside anyway. I couldn't sit inside and listen to that. Tram bells sound better. They bring the food out and iced tea is a bonus.

It was hot later, and the wind got up and tore the words out of our mouths and threw them away, so we had to lean in to converse. We caught the tram home. Its airconditioning was working. It cuts out for the peak; it works beautifully when the trams are empty.
Posted by kitchen hand at 4:48 PM 2 comments

The post directly under this one may have restored my brother's faith in simple parties. (Just last Thursday, I sat at the place he occupies; he was diagonally opposite; Alexandra was in a high-chair at the place occupied by our sister. We had lunch.)

That was July 1969. What else happened that month? Nothing much.

43 years later, our mother is still feeding us. Just not so often.
Posted by kitchen hand at 7:24 PM 2 comments 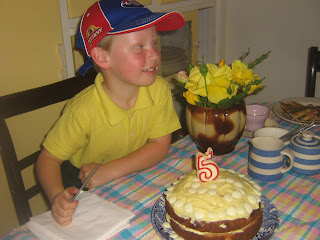 Yes, he's grown. (He's not a Footscray fan, they gave out the caps at kindergarten as a kind of early recruitment drive. He remains true to the Same Olds, but the cap is handy.)
Posted by kitchen hand at 11:13 AM 5 comments

How do they hold their cutlery?

The only hand-held devices you can use at this restaurant are your knife and fork.


"Only six months ago we never saw an iPad, but I've had a two-year-old in here with an iPad - it's a joke," co-owner Nabil Kurban said.

"We are just letting people know that being at the dinner table for the family is the most valuable time of the day so that people can say, 'How are you, how's your day, is everything OK?'

"It's a very special moment. We are just asking for one hour a day - no gadgets at the dinner table."