Something in the water.

The first time I visited New South Wales was by river. I swam across the Murray when I was a teenager. Why walk across the bridge when you can swim? I wouldn't do it now; happy to read a book by the bank while the sun goes down. I never read before mid-afternoon. One of those habits you slip into after a lifetime of enforced academic and, later, work-related reading. But I'll read well into the night, light and eyelids permitting.

Right now, it was the time of night when the birds in the trees have shut up at last and the only sound was the far-off groan of trucks on the Murray Valley Highway. The book started this way:


I had just finished breakfast and was filling my pipe when I got Bullivant's telegram. It was at Furling, the big country house in Hampshire where I had come to convalesce after Loos, and Sandy, who was in the same case, was hunting for the marmalade.

All right, that brings me to another curious first. This was the first book I read completely online: John Buchan's Greenmantle. Must have been in the early 2000s when Project Gutenberg started. Now I was re-reading it in hardback and managed to get a few chapters in before dark. It seemed more exciting in print. Maybe it had just been a strain reading a book on a screen. Or perhaps it feels better reading about an environment completely foreign to the one you are in:


The day had started bright and clear, but a wrack of grey clouds soon covered the sky, and a wind from the east began to whistle. As I stumbled along through the snowy undergrowth I kept longing for bright warm places. I thought of those long days on the veld when the earth was like a great yellow bowl, with white roads running to the horizon and a tiny white farm basking in the heart of it ...

Especially when the lead character longs for the opposite. I put the book down. The light was failing but the heavy air was still very warm. The dying fire cracked twice and then an odd rippling noise came from the river. Are fish nocturnal? Or was it someone down by the water?

Catfish John was a river hobo
Living by the river bend

Sixty-one Christmases, and a warm salad.

2012 marks the sixtieth anniversary of the first Christmas celebrated in my mother's house. She and my father moved into the just-built house during 1952, after spending the first eighteen months of their marriage living in her mother and father's house in Ascot Vale; the second half of that period with a baby. West Essendon was a new suburb then, with nothing farther west except thistle and the Maribyrnong river valley.

Over the years Christmas lunch attendance grew as six babies followed the first, receded as grown-up children pulled up roots and ventured overseas, and then grew again when they returned and settled down and had their own families. We all thought the annual Christmas event would eventually become a moveable feast, but it hung on grimly in Deakin Street, staunchly defending moves to extricate it to new surrounds, failing only one year during the innovative '80s when some brave pioneer thought a Christmas picnic at Brimbank Park might be a good idea. Not a good idea was having to transport the food and drinks and glasses and crockery and cutlery and condiments and crackers and gifts and having to sit on blankets on the ground and pack it all up again suddenly when it rained, or the temperature hit 40 celsius (I can't remember which, but it might have been both given this city's changeable weather). That contingency made everyone remember, oh yes! that's what roofs are for! The next year Christmas, lunch was safely back under a Deakin Street roof. It has never moved again. These days everyone brings something and we always seem to manage a good variety of dishes even though we never talk about it beforehand. To date we have not witnessed 20 turkeys or 20 chicken curry casseroles or 20 baked hams with blackberries and balsamic vinegar on the Christmas table. Must be telepathy.

Warm and drain two tins of chickpeas, or cook your own.

Finely dice half an onion.

Cook enough couscous to fill a cup when fluffed up.

Combine the sweet potato and the chickpeas. Mix together half a teaspoon each of cumin (seeds or powder - I use seeds), cinnamon and pepper and one teaspoon each of powdered ginger and salt and mix it through the fluffed couscous. Now add the spiced couscous to the sweet potato and chickpea mixture. Place in a large flattish salad bowl and dress with the juice of a lemon and a little white vinegar. A heavier dressing is not necessary especially when the salad is served with Christmas fare. To finish, shower the salad with toasted pine nuts, a tablespoon of diced onion and some chopped coriander. Turn up the spice volume as desired.

Campfire risotto with cream of chicken and mushrooms.

This is the kind of thing that is ridiculed by the purists and loved by everyone else.

I walked half a mile to the dusty Foodworks supermarket in the small country town that the river winds through - or should I say the town built around several bends in the river - and bought a tin of cream of chicken soup, a packet of grated parmesan cheese and some fresh button mushrooms. From its wine shop annex, I bought a bottle of Deakin Estate chardonnay.

Then back to the river. I set some water to boil over the flame and, in a pan on a cooler part of the fire, I warmed some arborio rice in olive oil. When  the water bubbled I carefully and gradually poured some into the rice, interspersing it with white wine. I opened the tin of cream of chicken soup and folded the contents through the simmering rice, once again gradually. Its aroma was so good I was tempted to eat some of the salty, chickeny ooze straight out of the can. (I actually did this as a child - canned soup concentrate is delicious!) Then I swirled some white wine into the empty tin to wash out the remaining soup and tipped it into the rice, which was expanding slowly. Then the button mushrooms, chopped in four slices each, and a good amount of parmesan and some black pepper. After twenty minutes of stirring while staring at the cockatoos coming home to roost in the early evening sun-burnished river red gums it was nearly done and the chickeny, mushroomy aroma went steaming lazily across the river. It was about half past six.

Later, the low sun made the river a broad gold ribbon. Silhouetted downstream was an odd-looking vehicle parked with one headlamp over the water. It looked like a 1950s bus on a truck chassis. I strolled around the arc of the riverbank to investigate. A couple, obviously retired, sat on two folding chairs behind a small campfire over which a kettle was murmuring. We got talking. The man, a retired mechanic, had fitted out a Leyland bus body and fixed it to a truck undercarriage with a four wheel drive set-up; a kind of customised hotel on wheels that you could drive up a mountain or across a river and that you never had to check out of, or pay a desk clerk to insult you. The lobby was wherever you parked it and this one had a river in it. The couple were (or 'was' depending on which pedant you ask) on their way around Australia, and taking their time. They had been watching the children playing farther up the river earlier in the afternoon. After we finished talking about converted buses, the man made some complimentary remark about the children, staring into the distance as if wistfully, and then he said suddenly, "Cherish them." Who knows whether he had had his own children and they drifted away or died or got married and went abroad; or whether he was just being sentimental after a few cold beers by the river on a golden summer evening. I didn't ask. I just said, yes. Yes, I do.
Posted by kitchen hand at 1:47 PM 3 comments 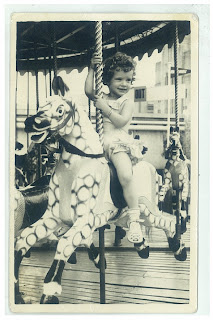 My sister is two years and six months in the photo, taken by my father one hot January day in 1966, with date and location written on the back.

Question: which Melbourne CBD building hosted this rooftop carnival? The fragment of building in the background may give a clue. Or not.

Take a wild guess in comments below.

Answer in a couple of days.