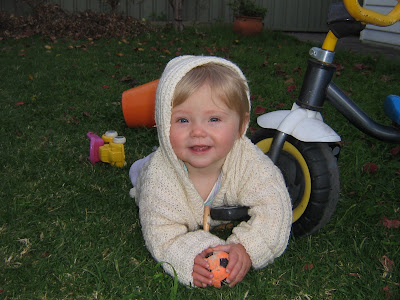 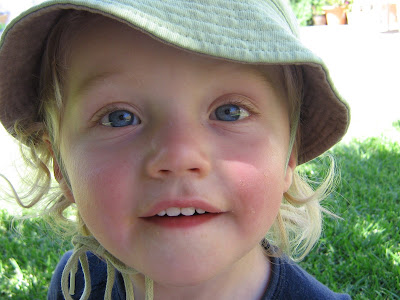 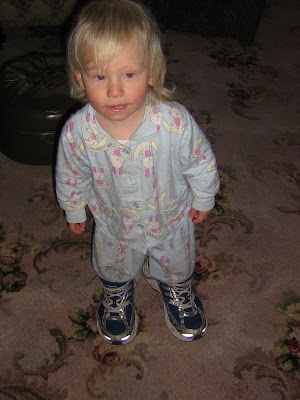 Or is it at William the top, Thomas in the middle and Alex below?

Picture in post below resized for readability.
Posted by kitchen hand at 10:43 AM 0 comments 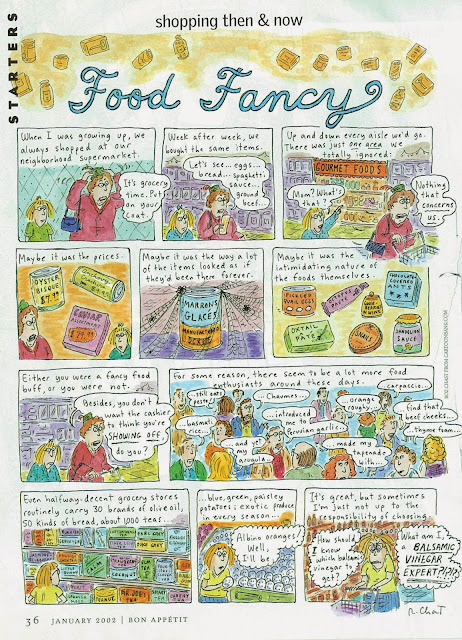 Roz Chast's illustrations of domestic desperation are like hand grenades with fool-proof pins. There's TNT in there but it never goes right off. Her characters keep a lid on it somehow.

Satire or reality? My mother has every one of those teas. Not that she's a foodie: far from it. People keep giving them to her. 'Gourmet' teas seem to have achieved a kind of exotic attraction beyond their actual composition and have become the default gift - like aromatherapy kits about twenty years ago - for old ladies who have, or have had, everything. My mother's tea collection sits at one end of the kitchen bench, in a corner near the stove. The tea, loose or in bags, is in tins with lids, tins without lids, spilling out of opened boxes, packed in unopened boxes, piled up in wicker baskets and just laying loose, a tea mountain which occasionally collapses with outcrops of organic, fair trade, single estate, sustainable, ethical and socially responsible caramel-flavoured tea crashing down like miniature avalanches.

Every time my mother puts on the kettle for a visitor - including family members - she offers the entire checklist of flavoured teas, even though you have told her a hundred times all you want is ordinary black tea with milk and two sugars, as you have for the last forty years.

The boxes, of course, are flammable, and the dry tea probably is as well. One day the kitchen will go up in flames, and West Essendon will be shrouded in Earl Grey, English Lunch and Bunny tea smoke. It will be a very civilised fire.

Happy Christmas shopping. The above scene is being enacted in millions of stores right now all over the world.
Posted by kitchen hand at 7:37 PM 1 comments

A case of mistaken identity. Or was it?

The boys were convinced Ishant Sharma works part-time as a security guard in Coles. They saw him there several times when we were shopping after school. But he wasn't there while the first test was on. That was proof enough for the two boys. "Why don't you ask him?" I said. "And find out once and for all?" They haven't seen him since; but we are in the middle of the second test right now. He must be in Brisbane.

This incident mirrors what happened to my younger brother when he visited India years ago, and was accosted by scores of young Indian boys, who asked him if he was Australian, and then if he was Geoff Lawson; as if one followed the other logically. If you're an Aussie, you must be Geoff Lawson.

Recipe for a hot summer night:

Toast half a cup of pine nuts.

Finely dice a quarter of onion; or chop a few spring onions.

Cook enough couscous to fill a cup when fluffed up.

To finish, shower the salad with toasted pine nuts, the onion and some chopped coriander.
Posted by kitchen hand at 10:45 AM 0 comments

Tableau: the ancient shed at the end of the yard leans to the east. It was built in the 1940s, a simple rectangular steel frame with sheet-iron walls and a corrugated roof. It has one door, no window, and no light, because power was never connected. It is pitch black inside. You prop open the north-facing door to admit light. This works best in winter when the sun is further north, slanting in.

Action: I enter screen left and pull open the crooked shed door. Ancient hinges complain. My eyes become accustomed to the darkness, and a great shape can be made out in the corner: a hulk of cast iron on wheels. Covered in dust, it resembles an abandoned steam train in some long-forgotten rail yard shed. Tracking shot: I somehow I drag it out into daylight. Locked-off camera: I hose the dust off the iron horse, and exit screen right. It dries in the warm air.

Against a painted backdrop of a line of ornamental pear trees and a hedge of x. cupressocyparis leylandii, I load the iron horse up with coal, beautiful coal; bane of the eco-warrior (yet to exist, of course) and friend of the locomotive engineer and the barbecue lover alike.

Extras furtively enter stage right and steal pieces of unlit coal for their tepee fires. I light the coal pan with some kerosene-soaked firelighters, and that dramatic fiery moment signals the commencement of barbecue season, a quasi-religious experience akin to the lighting of candles at the start of Advent, coincidentally occurring in the same week.

The meat
Take four lamb leg steaks, beat them with a meat mallet to flatten out slightly and arrange them on a plate. Over the meat, scatter four finely chopped cloves of garlic and ten chopped mint leaves. Add the juice of two lemons, a squirt or two of olive oil and sprinkle cumin, salt and pepper.

The salad
Meanwhile, rinse, spin and chop a bunch of parsley as finely as possible. Take a dozen mint leaves and despatch the same way. Cut six spring onions finely and mix all three together.

Rinse and drain 75g of bulgur (use couscous if you have no bulgur but don't rinse) and mix with the juice of two lemons and three finely chopped tomatoes. Digression: there's only one way to cut a tomato and that is with a very sharp knife. Hate to state the obvious, but many people are afraid of sharp knives. A chef recently said that the old saying about blunt knives being more dangerous is nonsense, and that a very sharp knife can do severe damage in the wrong hands. He was right. Tracy, for example, refuses to use a sharp knife at all and prudently uses a serrated knife on nearly everything in the interests of safety. She should have been called Prudence, but was stuck with Tracy, because she was born in 1965 and in that year every girl in Australia was christened Tracy. Whence (sic: SOED, entry 4) there were sixteen Tracys in her Grade One class at Doveton Primary School in 1971. Sixteen! The rest of the girls were Cheryls, Susans and Donnas.

Meanwhile, back on set so to speak, combine the tomatoes, lemon juice and bulgur mixture with the parsley, mint and onion mixture. Fold through a few tablespoons of olive oil and watch the mesmeric blend of deep green, bright red and white gain a sheen as the oil does its unctuous job. It will be difficult to prevent yourself eating it on the spot, because the aroma that arises from the mixing bowl is as irresistible as any aroma ever smelled by mankind.

Sauce or dressing?
You decide. Blend a can of butter beans (as a change from the ubiquitous chick pea) with a cup of yogurt, a few leaves of mint, a clove of garlic and salt and pepper. It will have a runnier consistency than hummus. That makes it a sauce or a dressing rather, than a side. But that's just pedantry.

The coal blazes, lighting up the frontier set and casting a golden radiance on the faces of milling extras. As the flames die and the coals glow, meat sizzles, chargrilling and spreading tantalising aromas across the set. Extras queue. Meat is distributed, sauce/dressing added and plates piled high with tabouleh and yogurt, and served with fresh flat bread. As the night cools and the colour drains from the painted desert sky, extras gather around the iron horse, which radiates its comforting warmth. You need heat. Heat is good. It keeps people alive. It's the cold that kills them.

It feels like that around here. I should have worked in movies.

It was one of Australia's greatest speeches ever made.

That makes two in five days: by one man.