If this doesn't melt your ice caps nothing will.

The Herald Sun, among other newspapers, reports on an intergalactic collision:

A collision between two massive black holes generated ripples in time and space and formed another black hole, 80 times bigger than the sun, according to a new discovery by Australian and international scientists.

When? Yesterday? It doesn't say. But caution is advised:

In total, four black hole collisions have been detected ... "These were from four different binary black hole systems smashing together and radiating strong gravitational waves out into space," ANU Research School of Physics and Engineering's Professor Susan Scott said.

And I was worried about snakes. But look out, there's more to come:

... a third observational run by LIGO (the Laser Interferometer Gravitational-wave Observatory) next year would add to the identification of 10 black-hole mergers and one neutron star collision.

Just to be on the safe side, I'm digging a bunker in the backyard this weekend. 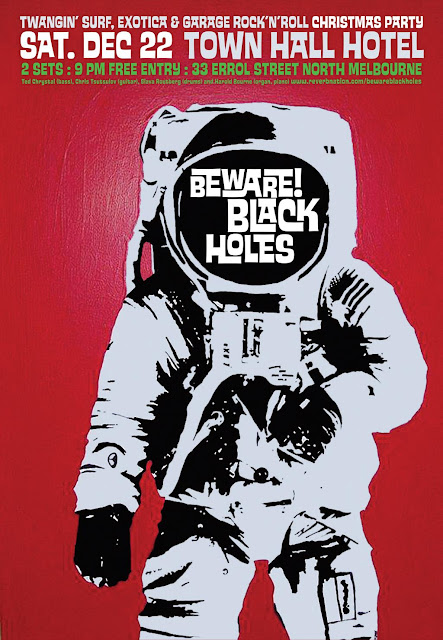 Meanwhile, check out these black holes at the Town Hall on December 22. Beware! Black Holes sounds like Link Wray meets the Hondells with a bit of Johnny Duncan and His Bluegrass Boys thrown in. Twang!