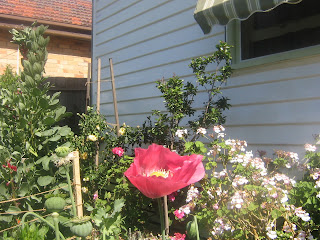 I was in town this morning, waiting to cross Swanston at Collins, close to 11 o'clock. Before the town hall clock struck the hour, two cops stepped onto the road and stopped both directions of traffic. Trams heading in three directions ground to a halt and the horses pulling carriages for tourists shook their heads. A few pedestrians ignored the cops and crossed anyway. Cars idled. Then a howling roar. Four RAAF planes in formation screamed overhead, following the spine of the city towards St Kilda Road and the Shrine of Remembrance, and were gone. In the sudden silence, a uniformed bugler stepped out of the shadows on the north-east corner of the intersection and marched onto the road. You could hear his footsteps. The horses shook their heads. The bugler raised the bugle and played The Last Post. Then a minute's silence. Then he played again, finished, turned on his heel in a neat military spin and marched back into the shadows. The cops waited a few respectful seconds and then switched on the city again with a wave of their gauntlets.
Posted by kitchen hand at 6:02 PM

so, if an equivalent proportion of the australian population were killed in war today as those who died in WW1 that would mean about 275,000 deaths. or 185 per day for 4 years. just a bit of armistice day maths to contemplate. or not.

So that's why the old vets sell paper poppies here on Veterans Day?

Indded, Paula. I always marvel at those country town memorials that show entire families of sons wiped out in WWI, the cream of nascent Australia.

Lindie, yes, that's the reason for the poppies.

Gorgeous. Contrasts so nicely with the situation I witnessed recently at a pedestrian crossing outside a suburban shopping centre the other day. About to cross against the lights (there were no cars coming) I stopped on seeing a policewoman on the other side of the road. A teenage boy continued to cross and the policewoman chased him (breaking the law herself?). When the "WALK" sign came on, I crossed the road listening to two women walking behind me. "You'd think they had nothing better to do with their time" one said to the other.