Old photographs: #1 in a series. 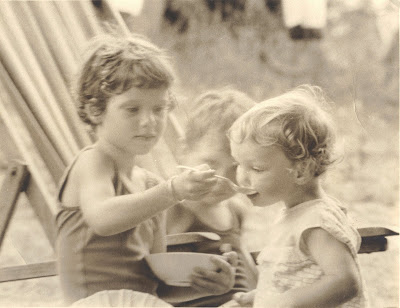 I have a collection of old photographs, many taken by my father. I may as well put them here.

The above picture, taken by my father during an Inverloch holiday in the summer of 1969-70, shows my younger sister feeding the baby of the family. Behind them partially obscured on a deck chair is the second youngest. My sister was six that summer, so that makes the boys almost two, and four and a half.

This is one of my mother’s favourite photographs: she recalls that the youngest was recovering from illness at the time. In the picture he looks tired but appears to be eating willingly. Today, my sister’s own youngest child is not much older than the brother she was feeding in the photograph forty years ago. Her serene expression and caring nature haven’t changed.

The house at Inverloch was a rambling Edwardian seaside farmhouse on a few acres at the top of a hill overlooking Anderson Inlet. Its bedrooms were cavernous and smelled like empty cedar wardrobes and the lounge room had dusty holiday-house curtains, an ancient bookcase stocked with old orange and white Penguins, and unmatching sink-into chairs in which to read them on endless summer afternoons. The kitchen, typically of early Australian farmhouses, could have fed fifty. Its fly-wire screen door banged onto a verandah that ran around the north, east and west walls, making the house cool and shady in summer. A windbreak of pine trees lined the drive; and at the back, a steep track had been cut through the bushy acres all the way down the hill to the beach. Across the track, the almost horizontal limb of a white gum stretched, low down. My mother used to sit the younger children on the branch and, rocking it gently, sing ride a cock-horse to Banbury Cross, to see a fine lady upon a white horse, rings on her fingers and bells on her toes, she will have music wherever she goes*.

I drove my first car to Inverloch years later to see the old holiday house and rekindle memories. It had been abandoned and vandalised, a jagged-glass wreck. Brutal sunshine pierced broken roof tiles and ribcage roof rafters, making furnaces of its once-cool plastered rooms. Later the house was demolished completely, and today scores of look-alike units spill down the hill where once my mother rocked her laughing children on the branch of a white gum tree overlooking the sea.

awesome :)
i used to read joe
i used to be uglygirly
just so you know

Welcome back! I remember!